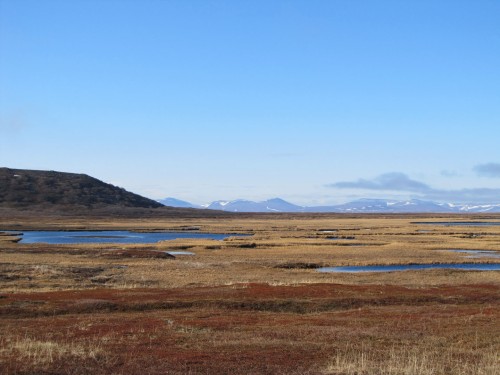 After a week driving north (to Denali) and south (to the Kenai) from Anchorage, I hopped a flight to Nome in western Alaska.  Nome is a small outpost on the Bering Sea.  It is surrounded by tundra, mountains, ice, and some very cool birds that are hard to see elsewhere in North America.  There are three dirt roads leading out of town (some 75 miles each), so the plan was to rent a pickup truck and drive into the wilderness to see what I could find.

I met Neil Hayward from the Boston area a few months ago thanks to the miracle of the internet and the online birding community.  Neil is doing a North American Big Year in 2013, and what a year it has been so far.  He has been doing some amazing trips and seeing some great stuff, and he agreed to meet me in Nome for four days of intense birding.

I was so glad to have Neil along for this leg of my trip.  He is an excellent birder, and a great traveling companion.  I thoroughly enjoyed exploring the area with him.

We both arrived in Nome on the afternoon of June 5th, but our rental pickup wasn’t available until the morning of the 6th.  Fortunately we bumped into Abe Borker and his father Joe, who very graciously invited us to ride along with them in their truck for an afternoon of birding the Council Road and Safety Lagoon.  We didn’t need to be asked twice, and soon the four of us were off.

We had a fantastic afternoon.  Some highlights for the day were two Arctic Loons, Red Phalaropes, an Emperor Goose, and this Gyrfalcon (and three fuzzy babies) nesting under a bridge: 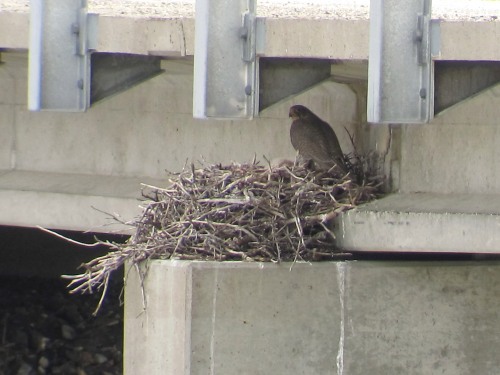 I got a few pictures of some birds that were close to the road, including Bar-tailed Godwits (two in their alternate breeding plumage and one still in basic winter plumage): 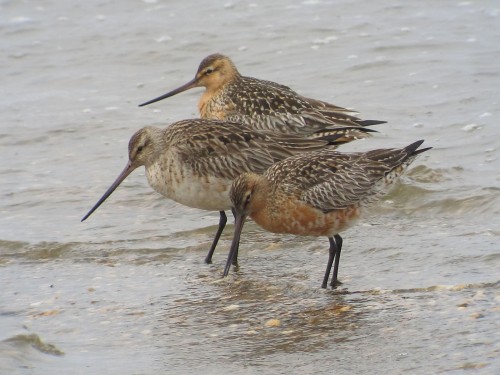 And a second-summer Slaty-backed Gull (to the right of the white immature Glaucous Gull): 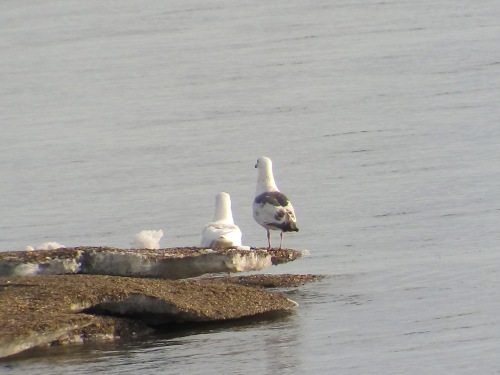 We also saw a fox, and the remains of a Tundra Swan that presumably had been the fox’s breakfast this morning.

Further along the road, there were reminders of Nome’s history as a gold rush town.  Gold was discovered in this area in 1897, and a few years later the area was inundated with prospectors.  It was the largest town in the Alaska Territory by the turn of the Century a few years later.  Reminders of this era remain in many places today, like this old abandoned gold dredging machine.

A railroad line was even planned and built in the early 1900s from Nome to Council City.  Although it was never completed all the way to Council City, the line ran for several years until about 1907.  Difficulties with construction, operation, and financing stalled the project, and in 1913 the line was wiped out by a huge storm.  The cars and engines still sit in the tundra where they were wrecked, nearly 100 years ago. 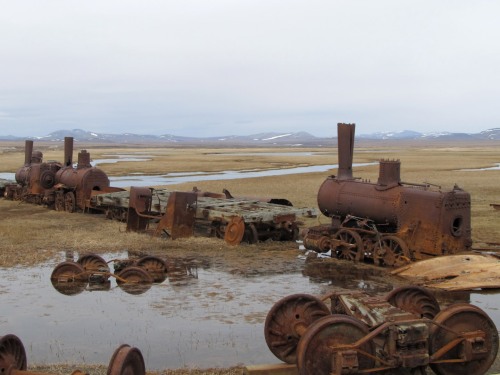 Abe, Joe, Neil, and I explored the Council Road area late into the evening.  With sunset around 1:30 am, there was seemingly no reason to end our trip.  We finally rolled back into Nome about 10:30 pm, and were fortunate to find one local establishment still open: the Bering Sea Bar and Restaurant.  After a meal, I headed to bed.  Sunrise would come early (4:28 am), and I had three more days of birding ahead of me.

I often end my posts with a pretty shot of the sunset, but this time you’ll just have to use your imagination.

Travelling south, I passed through Anchorage and continued down the Seward Highway to the Kenai Peninsula.  This area is in many ways very different from Denali, but just as spectacular.  It borders Cook Inlet and Prince William Sound, so for one thing I’m back on the coast.  The Kenai area is also home to the Harding Icefield, which spawns several dozen glaciers.  I visited a number of them on a trip through Kenai Fjords National Park. 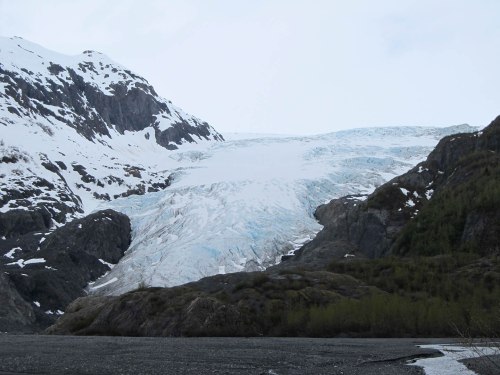 The photo above it Exit Glacier, which is one of the most accessible glaciers in the park.  You can drive to within a mile of it, and hike right up to its “toe.”  Exit Glacier is retreating, probably due to global climate change, having become over a mile shorter since 1895.

Glaciers are the outflows (the “drains” if you will) from the Harding Icefield.  The Icefield is a basin area that gets well over 30 feet of snow per year on average.  Over time this snow is compacted into very dense ice.  The ice slowly slides downhill, forming glaciers and carving out new valleys.

Yesterday I took a 9-hour boat trip out of Seward to tour Kenai Fjords, to see the glaciers and the wildlife of the area.  I was not disappointed.  The scenery was impressive.

Sea Otters were common, and not shy at all.

We saw five Humpback Whales, including this one very close to shore: 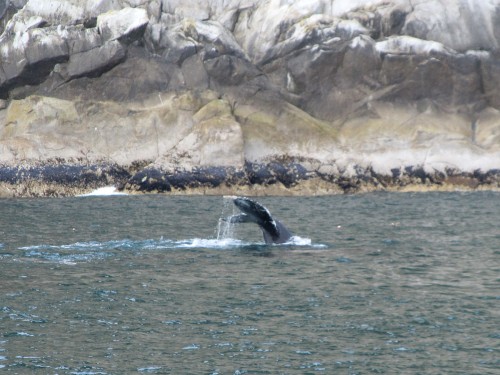 And this one farther out:

A transient Orca swam by, making some of the smaller marine mammals a bit nervous.  But these Harbor Seals in the shallows didn’t look too concerned.

Nor did these Steller’s Sea Lions high on the rocks:

Steller’s Sea Lions are one of several Northwest animals named after Georg Wilhelm Steller, who travelled with Vitus Bering on his 1740s expedition to Alaska from Russia.  Steller was a doctor and naturalist, and described a number of new species of flora and fauna unknown to the Old World.  Several of Steller’s namesakes are now extinct (Steller’s sea cow) or endangered/threatened (Steller’s Sea Eagle and Steller’s Eider).  Steller’s Jay, however, is doing quite well and can be seen in my yard back home in Washington state (and throughout much of the American West).

Glaciers were another highlight of the boat trip, and we spent some time at the incredible Holgate Glacier. 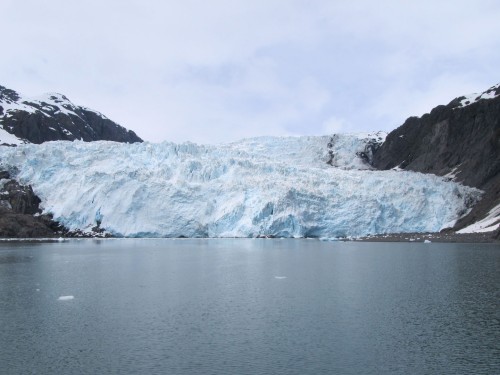 The bluish color of the glacier comes from light that gets scattered by the densely packed ice.  Most frequencies of light pass through the ice, but blue tends to be absorbed and re-emitted by the electrons in the water molecules, scattering the light and making the ice appear somewhat blue.

Nearby, we could see the much smaller Surprise Glacier.

Birds, of course, were also a highlight.  I saw eight species of alcids, seabirds of the puffin, murre, and auklet family.  Seeing hundreds of Horned and Tufted Puffins was a highlight, as well as a half-dozen Parakeet Auklets up close –  a new bird for me.  The heavy clouds, drizzle, and rocking of the boat made photography difficult, and most of my bird pictures didn’t come out at all.  But I did get a few pictures of some Common and Thick-billed Murres resting on a cliff: 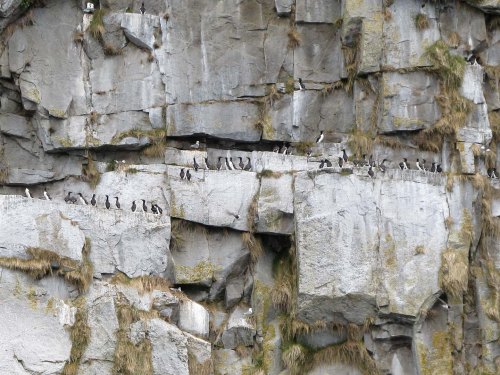 And hundreds of Black-legged Kittiwakes swirling around their nesting colony:

Kittiwakes are a kind of gull.  They make their nests on sheer rock walls on offshore islets to protect them from predators.

Returning to Seward, we passed huge rafts of murres on the water – thousands of them.

Despite the cold and wet weather, and some difficulty in finding some of my target species, I have thoroughly enjoyed my visit to the Kenai Peninsula.  I’ll be here another day or so, and then I’m headed northwest to Nome and Gambell.  I’m not sure when I’ll be able to update this blog again, but I will when I can.  I’m about to head into parts unknown (at least unknown to me!).

I have arrived in South Florida.  I’ve actually been here for several days, but have been too busy trying to see everything there is to see here to work on my photos and blog posts.  I’m here in the Sunshine State to see some special subtropical birds which reach the northern (or western) edge of their range here, and also to catch a bit more of spring migration as birds stream through Florida on their way north.  Also, at the end of my trip I’ll be catching a boat out to the Dry Tortugas, a set of islands in the Gulf of Mexico about 65 miles west of Key West.  (More on that later!)

Instead of taking you through my travels here so far chronologically or geographically, I’m just going to post a bunch of pictures and tell you a little about each one (or at least about most of them).

There is a lot of water in Florida.  The ocean and the gulf, ponds, canals, wetlands, mudflats, and the Everglades (which is basically like one giant sheet of extremely shallow water).

All of this water is a bonanza for water birds of all types: herons, egrets, sandpipers, cormorants, etc.  Here is one of my favorite, the Least Bittern:

That is an adult, hunting for minnows in the shallow water.  A juvenile Least Bittern peeks out of a nest not far away: 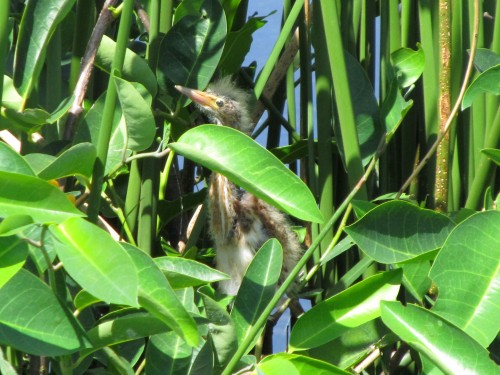 Cattle Egrets are everywhere.  They often forage in the same fields with livestock, eating the insects and other small animals kicked up by the large mammals.  It’s also nesting time for the Cattle Egrets, and here are two making a nest together:

I think this Double-crested Cormorant is too hot, based on its “panting” behavior: 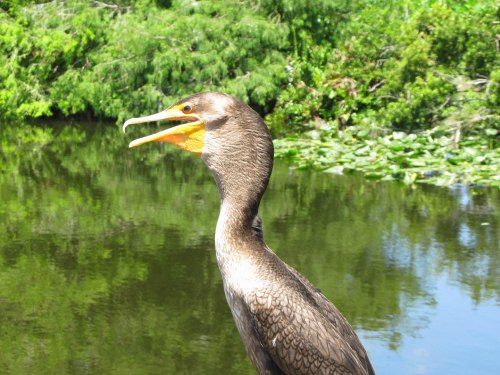 The riotous pink of Roseate Spoonbills are everywhere.  My daughter loves these the best.  This picture is for you, Piper!  I’ll try to get a better photo later this week.

Black-necked Stilts are making a terrible racket.  Some people call them “pool poodles” due to their incessant high-pitched yapping:

Sandpipers, like this Solitary Sandpiper, are stopping off for a just a quick refueling on their way up to the Arctic.

There are some cool plants here as well, like palm trees 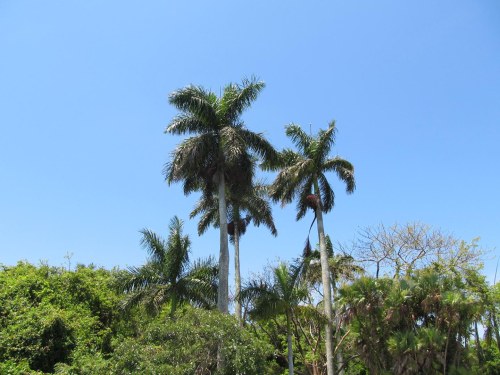 and many species of epiphytes (which grow on other plants):

The Strangler Fig is a special kind of Ficus tree that starts life as an epiphyte.  Its seed lands in the top of a tree (thanks to a bird, who ate a fig fruit shortly beforehand, and excreted the inedible part).  The seed sprouts and lives as an epiphyte for several years.  Meanwhile, it sends runners down the trunk of its host tree, which eventually reach the forest floor and grow into roots.  The Ficus grows larger and larger, and eventually “strangles” the host tree, usually killing it.  It’s an ingenious evolutionary adaptation to living in dense tropical forests where little light usually reaches the forest floor.  Here’s a strangler fig near the Anhinga Trail at Everglades National Park:

I have a lot more cool pictures and stories to share, but it’s late (and I have a very early appointment tomorrow with a very annoying sparrow), so I will leave you with this turtles.  They have it pretty good, I think: soaking up sun by the pool, eating some flowers, and watching the gators float by. 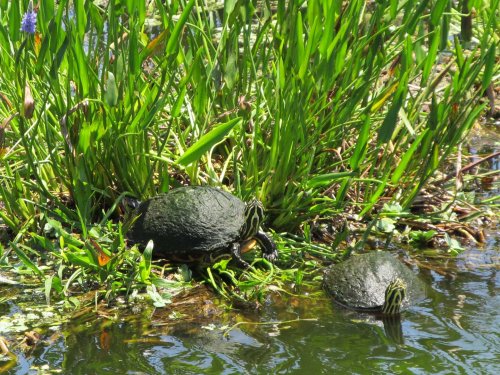