Short Trip to the Shortgrass Prairie

It’s been almost a year since I posted to this blog, which kinda makes sense.  I started it to chronicle my “really big year” of traveling to see birds and visit schools, a year that ended in June of 2013.  I thought about whether I should “retire” this blog, or to keep using it to share new travels.  When I returned to work full time in August of 2013, I vowed to reserve a little room in my busy life for the sort of adventures that occupied much of the 2012-2013 academic year for me.  And so in that spirit, I have decided to keep using this blog from time to time, as the occasion arises.  While I will not soon repeat the kind of Big Year that began for me two years ago, I hope to keep the spirit of inquiry and adventure that I kindled in myself that year alive, to make every year at least a little “big.”

It was in this frame of mind that I cashed in some frequent flyer miles for a short trip to Colorado.  While I don’t consider myself to be the kind of birder obsessed with lists and “ticking off” the next lifer, I do enjoy seeing birds that I haven’t seen before.  And I was also only four birds away from having seen 700 species in the ABA Area, a milestone of some note.  I turn 40 in January, and it would be pretty cool (although perhaps not totally practical) to reach 700 by then.  Also, my friend Neil Hayward keeps pestering me about getting to 700, so I guess there’s peer pressure too!

I flew into Denver on Wednesday morning, and headed northeast to the Pawnee National Grassland.  This area is some of the best preserved remaining shortgrass prairie habitat in the United States.

Shortgrass prairie used to be fairly widespread on the western Great Plains.  This habitat was shaped by relatively low rainfall and by the consistent grazing of abundant herds of American Bison.  The loss of the bison, overgrazing by cattle, and human development have greatly reduced the quality and quantity of this kind of prairie in Colorado and elsewhere in the American West.  Pawnee National Grassland is one place where you can still find vast swathes of unbroken shortgrass.  Interestingly, it is administered by the US Forest Service, although Pawnee is nothing but a forest of grass.

However interesting the shortgrass prairie is in and of itself, I was here for the birds.  And one bird specifically: McCown’s Longspur.  This species breeds in a thin slice of shortgrass prairie from Alberta down through Montana, Wyoming, and northern Colorado, and it winters in northwest Texas.  In other words, it’s not a particularly easy or convenient bird to see if you live outside the mountain west.  And while you can find them somewhat reliably on their wintering grounds as skitterish flocks of drab grayish birds, I wanted to see them in their summer glory: the males in their full breeding plumage (black, white, and chestnut), singing, and doing their parachuting display flights over the prairie.  So here I was in rural NE Colorado, with less than 40 hours to find the longspurs before my return flight to Seattle.

Driving along the few gravel roads that transect Pawnee, there was plenty to see.  Lark Buntings, the state bird of Colorado, were incredibly abundant. 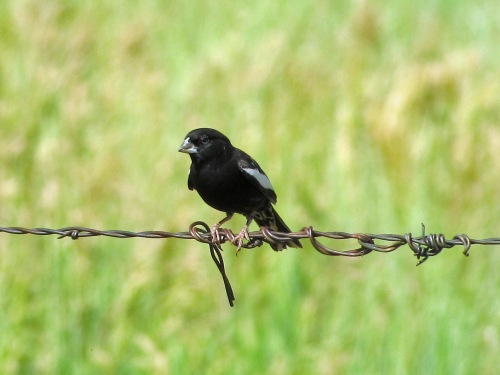 I saw probably 200 breeding pairs on territory in a day and a half.  Horned Larks were also very common.  I didn’t get any good pictures really showing how dramatic their “horns” can be – I guess that’s a job for another trip.

A real treat was finding a pair of Common Nighthawks sleeping on a rusty fence.  These birds, a member of the goatsucker or nightjar family (I love those names!), are usually most active at dawn and dusk.  These two were definitely snoozy. 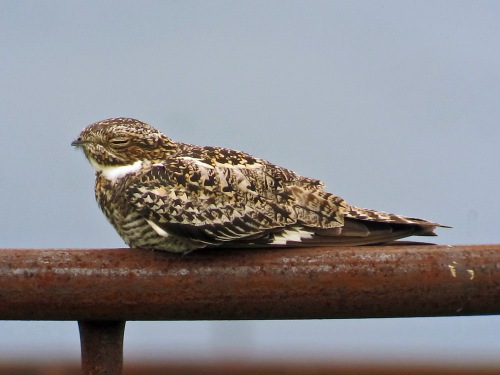 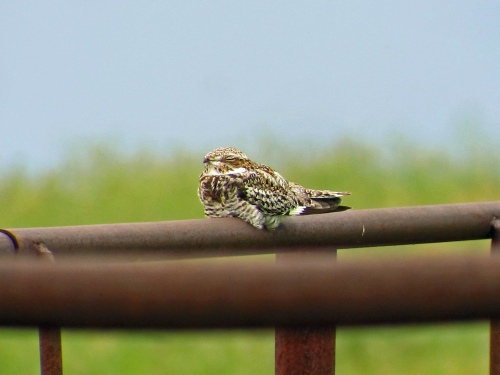 After a few miles, in the distance, I thought I caught the jumbled song of a longspur!  Trekking out into the prairie, I watched a lone male leap into the air and come fluttering down while singing his complex song.  I wanted to stay a while and watch him, but the wind was whipping up, and over my left shoulder I could see a serious storm building.

Beating the rain and lightning back to the car, I vowed to come back early the next morning to get a better look.

I drove through the afternoon thunderstorm back to Fort Collins, where I had dinner at local institution that holds a special place in the hearts of chemistry teachers everywhere.

This being a birding post, I’ll spare you the significance of Avogadro’s number to the realm of the molecular sciences (but you can read about it on Wikipedia if you are really interested).

Serious birders are in the field at dawn during the spring and summer.  And dawn was about 5:20am.  So I dragged myself out of bed and raced for the prairie.  After a bit of searching, I was rewarded with fantastic looks (and mediocre pictures) of about a dozen McCown’s Longspurs displaying, singing, foraging, and generally loafing about the prairie. 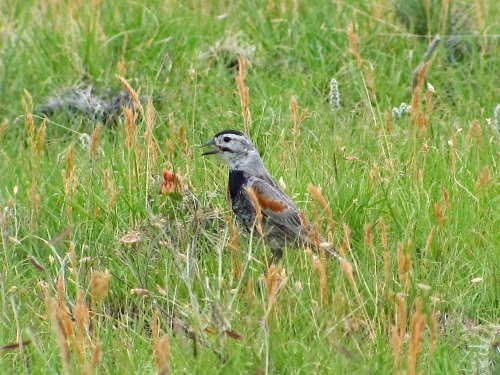 I spent the rest of the morning exploring more of Pawnee.  Sparrows were a highlight, including this Grasshopper Sparrow who posed for me: 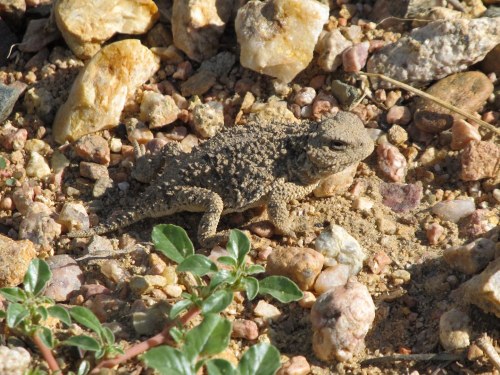 Some people call these critters “horned toads,” but they are reptiles and not amphibians.  This guy was only about 2 inches long, and almost perfectly camouflaged amongst the rocks on the side of the road.

All too soon it was time to head back to Denver for my flight home.  It was a very short trip, but I feel like I made the most of it.  My big year lives on, at least in little ways.