Birding, Gamification, and Implications for Education

Amongst those strange souls who are wild bird enthusiastists, there are bird watchers, and then there are birders.  I often describe myself as a “bird watcher” because that describes my hobby in the most simple terms.  I go outside, I find birds, I watch birds.  Bird watchers enjoy birds on an aesthetic level, and are often keen to understand their behavior and natural history.  I also like the term “bird watching” because it is less opaque that the rather bizarre term “birding.”  In the past when I have mentioned to acquaintances that I spent the weekend birding, on more than one occasion I have been asked  what kind of shotgun I have, or how many pheasants I bagged.  After all, if you met some guy at the beach who claimed to be “fishing” with binoculars (but without a rod and reel or a net), you might wonder if he’d lost his marbles.

Birders are similar in many ways to bird watchers, but the term ‘birder’ usually connotes someone who is more serious about certain aspects of the hobby, particularly identification and keeping various kinds of lists.  Birders are more likely to consider their passion for birds beyond the realm of merely a hobby.  If you hear someone at a hawk watch debating the gender and age of a soaring raptor a mile away, or a person out on the mudflats discussing the exact parentage of an immature hybrid gull, you are probably listening to self-described birders.  They might travel extensively, hoping to add a never-before-seen species to their ‘life list.’  Birders are also more likely to do various flavors of Big Days or Big Years, in which they attempt to find as many birds as possible within a certain geographic area in a specified span of time.  As someone who has just completed a Big Year spanning the continental United States and Canada, I’m a birder too.

Essentially, birders have taken bird watching and converted it into a game.  And what a game it is.  If you think football is impressive with its 100 yard field and hundred-man teams, or think a five day cricket test match is something, you have never really pondered the epic scope of a North American birding Big Year.  The ‘field of play’ is nearly 8,000,000,000 square miles and spans from the Florida Keys (24° N latitude) to Ellesmere Island, Canada (83° N latitude) and from Newfoundland (52° W longitude) to the end of the Aleutians (179° W longitude).  There are 20 billion players in this game, perhaps 50,000 human teammates (or competitors?) and billions and billions of sparrows, hawks, woodpeckers, hummingbirds, loons, and warblers who don’t care a whit about playing a game with people but are nevertheless the star participants.  The game lasts 365 days in a row (the length of 2920 football games, at three hours each, played back-to-back).

Some of these birds are relatively easy to find, like Surf Scoter or Rough-legged Hawk: 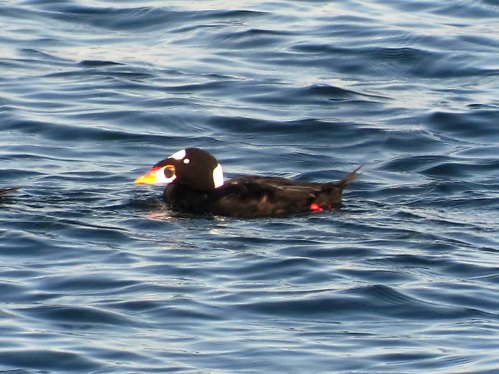 Some of them require going to a specific place at a specific time, like Whooping Crane (Aransas National Wildlife Refuge in Texas) and Rufous-capped Warbler (Florida Canyon in Arizona).

Some are so rare that even within this vast playing field that you can’t really count on them to show up at any specific location, like Crimson-collared Grosbeak or Barnacle Goose.  You just have to ‘chase’ them if and when they show up. 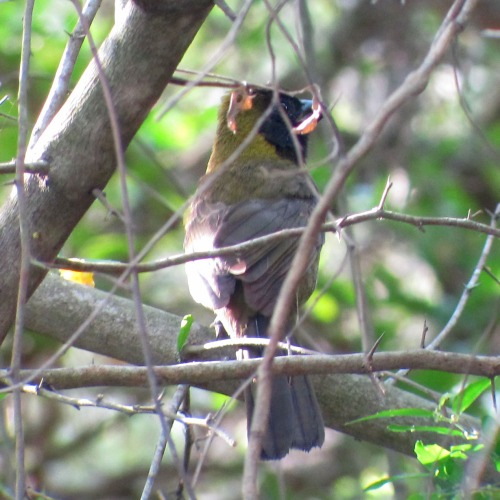 The rules of this game are pretty simple: find and ID as many birds as you can in the prescribed geographic area within the time limit.  The birds have to be alive, wild, and unrestrained when they are seen.  No dead birds.  No pet shops.  No eggs (?!).  Oh, and you have to engage in ethical behavior while you’re watching them (no harassing or killing birds, no trespassing, no disturbing endangered species, etc.).  Other than that, you can pursue the game any way you like.  Want to rent a helicopter?  Or limit yourself to species seen on foot, bike, or kayak?  No problem.  Want to bring a friend or hire a guide?  Ok.  Want to count birds you ID-ed by song or call, but didn’t actually see?  Totally fine.  All of these variations are sanctioned by the American Birding Association.  Of course, you can also ignore the ABA completely and make up your own set of rules.  As birders say, “it’s YOUR list” – meaning, you can play whatever game you want to.

Beyond the epic scope of a Big Year, the things that make it fun are the many challenges.  Just finding a particular species can be tough.  Can you pick out the rare Eurasian Widgeon from a huge flock of American Wigeon?  Do you know where to go to find the tame but often maddeningly elusive Spruce Grouse?  Will you actually see that secretive rail or sparrow out in the endless expanse of saltmarsh?  And then there is the challenge of identifying some birds.  There are 11 species of flycatchers in the genus Empidonax, many of which are almost identical except for the tiniest differences in physical structure and plumage.  Some birds can only reliably differentiated by voice.  Others show important but subtle ID clues in flight.  Still others are best identified by a combination of range, habitat, and/or behavior.

And what you do “win” if you play this game?  Mostly a batch of enjoyable memories, a sense of accomplishment, and perhaps the thrill of discovering something new.  There are no cash prizes, no trophies, no fame for the “winners” – perhaps just a little recognition and admiration from the tiny fraction of the overall population that claims to be serious birders.  People often ask me how birding is “refereed” – how do you know that a birder has seen the birds that he or she claims to have seen?  The short answer is that birders operate on the honor system.  There are very few “cheaters” for the same reason that so few people cheat running marathons, or climbing mountains.  Sure, there are always a few people willing to take the subway, but most people run marathons for the sense of accomplishment.  They do it to get in shape, to push themselves, to join a community of runners, to add meaning to their lives.  Cheating would defeat the purpose.

Spending this past year playing my own version of a birding game while simultaneously visiting a large number of schools has lead me to think about the ‘gamification’ movement in education.  Evolutionary biologists tell us that the origin of play and games in many species may be an adaptive response to make learning new skills fun.  Lion cubs might play with each other to hone their hunting skills, while human cubs engage in games to sharpen their athletic prowess, intellect, or social skills.  Teachers look to capitalize on this natural fit between learning and games in their classrooms.  Games may help to motivate students to practice skills or gain knowledge, hoping to accumulate prizes or “level up” – or just because the act of playing is fun.  Playful learning can foster collaboration, creativity, and critical thinking.  Many games allow students to model the real world, and let them interact with this model in authentic and compelling ways.  Simulations can teach students cause and effect relationships, arm them with new strategies or tactics, or simply provide them with different perspectives or new points of view.

Of course gamification is not a panacea for all of our educational ills.  And it can be done poorly.  If the game becomes disconnected from meaningful learning experiences, it ceases to be a valuable education tool.  Some birders get so wrapped up in the game of birding that they also begin to disconnect from the other meaningful aspects of their hobby.  I’ve seen a few birders who will drive eight hours straight to see a new bird, watch it for all of 5 seconds, tick it off their list, and hop back in the car.  Gone are an aesthetic appreciation of the creature, a curiosity about its behavior and natural history, and a sense of wonder and connection with our world.  For these reasons, I try to remind myself that I am a bird watcher and not just a birder.  And when I go back to teaching this fall I will embrace fun and games with my students, but I will also remember that games by themselves cannot replace wonder, curiosity, and a passion for understanding our world.