The last three days have passed in a blur.  With 24 hours of light (including 21 hours when the sun is actually above the horizon), there is a surreal sense of timelessness.  One day blends seamlessly into the next.  Fog rolls in, fog rolls out.  Rain changes to sleet, and sleet into brief bursts of sunshine.  The pack ice on the Bering Sea blows in, and then blows out.

The ice patches that still dot the landscape melt and re-freeze, making interesting patterns and formations. 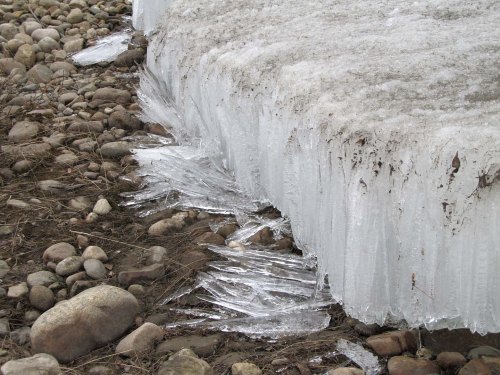 Many times I’d forget whether it was time for breakfast, dinner, an outing, or bed.  I’d get back in the truck after a short hike across the tundra to find (to my amazement) that it was nearly 10pm.  One day I brushed my teeth four times, the next I forgot completely.  I couldn’t remember if an event happened earlier that day, or the previous day, or the day before that.  But the one thing I know is that Neil and I typically spent a good 14 hours in the field, sometimes longer, and we saw some amazing things.

On our first full day, we headed out Kougarok Road.  Highlights included Northern Wheatear, Eastern Yellow Wagtail, and Rock and Willow Ptarmigan. A female Willow Ptarmigan even posed in the road for us:

We also saw Muskox; some were distant adults:

And one adorable baby muskox briefly ran along side the truck:

In the afternoon we drove back along Council Road, where Neil’s sharp eyes picked out a group of four rare Steller’s Eiders floating along on a small piece of sea ice.

They were too far away for my wimpy camera, but we got great looks through the telescopes.

The next day we explored the third road out of Nome, Teller Road.  A moose greeted us on the edge of town. 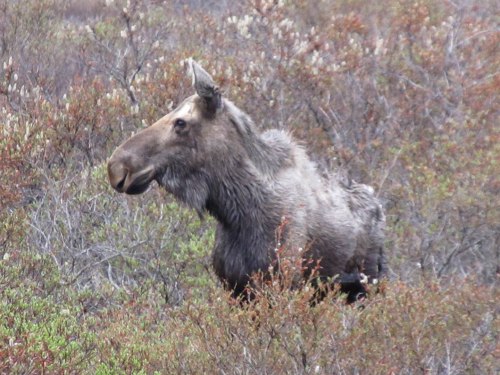 Our jaunt down Teller was another great success.  We found singing Bluethroats, and Neil got some amazing photos of this Old World thrush (or is it now considered a flycatcher?) that barely ranges into Alaska.  He promised to send me some of his pictures.  Neil also found a White Wagtail, a rare bird even for the Nome area.  This Asian vagrant fluttered about the edges of the Sinuk River near a bridge, and I snapped some blurry but identifiable photos for posterity:

For our final full day in the Nome area, Neil and I again teamed up with Abe to look for the mythical Bristle-thighed Curlew.  There is exactly one accessible location in North America where this shorebird breeds, and I use the word “accessible” loosely.  First you have to fly to Nome, via Anchorage (and maybe some other places).  Then you have to secure a vehicle and drive 72 miles north on the Kougarok dirt road.  Then you have to climb across the wet tundra up a mountain ridge to the Curlew’s nesting grounds, a hike that has been described as “walking on bowling balls” due to the nature of the low but very thick plant life there.  Then you have to identify the Curlew, which looks extremely similar to the Whimbrel, another shorebird that nests in the same area.

Neil, Abe, and I left Nome very early, stopping only to search (successfully!) for Arctic Warbler about 20 miles up the road.  We arrived at milepost 72 by 9am, and began the relatively short but squishy hike up the ridge.  I have to hand it to these curlews – they picked a remote but spectacular place to raise their young:

After getting to the top, the first large shorebird we spotted was a Whimbrel.  But a short time later, another bird came flying in, giving the Bristle-thighed Curlew’s characteristic call, and showing its distinctive unstreaked, buffy rump.  This is one of the hardest birds in North America to actually see, and we were all pretty happy about finding it.

We hung around for a while, watching an American Golden-Plover and some displaying Long-tailed Jaegers, and then headed back to the truck for the long drive back to Nome.  After vowing to “go to bed early for a change,” Neil and I were again out birding past 10pm before I finally convinced him to go back to Nome for dinner.  I was tucked in no later than about 1am.

This morning I was scheduled to fly to Gambell, a tiny Yupik village on St. Lawrence Island.  Unfortunately it is very foggy at the Nome airport today, and I’ve spent the last four hours in the waiting area at Bering Air to see if our flight will go out.  The only good part about this is that I’ve finally been able to catch up on my blog a bit.  Currently we’re still on “weather hold” and the fog does not appear to be lifting.  If the flight is canceled, I’ll try to find a place to stay in Nome tonight (the place I’ve been staying is full up!) and maybe try to get on a flight tomorrow.  Travelers to Alaska sometimes have to be flexible and patient.  But it’s worth putting up with the weather and the delays to be able to visit a special place like this.

One response to “Roaming Nome”