I’m in California’s Central Valley for a few days, exploring a region of the country that I have not yet visited this year.  Many people know the Central Valley as one of the nation’s agricultural hotspots.  It produces almost a tenth of all of the fruits and veggies grown in the US, supplying much-desired produce especially during the cold winter months when much of the country is snowbound.  Apparently it’s especially suited for growing almonds, as the Central Valley produces 70% of the world’s almond supply.  Who knew?

In the far northern valley where I am now (northwest of Sacramento), many of the farm fields are fallow or flooded for the winter.  But that doesn’t mean that they are idle or empty.  Three million ducks and almost a million geese use the valley as a wintering site, and many of them spend much of their time in these muddy or flooded fields.  Raptors who breed further north also come down to feed on the abundant rodent population (rats and mice are so numerous here in part because they feed on the grain crops that grow in the spring, summer, and fall).  So during the winter, the farms and ranches of the central valley switch from growing asparagus, corn, and tomatoes to growing ducks, geese, hawks, and owls.

Here is picture of a Northern Shoveler.

Shovelers have huge, spatula-shaped bills that they swing back and forth in the water, straining out small aquatic invertebrates.  In 30 minutes of walking approximately half a mile down a rural road in Yolo County, I passed an estimated 3000 Shovelers.  No, I didn’t count each one.  But you can count a group of ten ducks, and then see what that looks like.  Then you can count to a hundred by counting ten groups of roughly ten ducks each.  And so on.  And that’s not including the other ducks present: Buffleheads, Gadwall, Mallards, Ring-necked Ducks, Scaup, Green-winged Teal, etc.

Bird of prey are also out in force.  I’ve seen 11 species of hawks, falcons, eagles, and owls in only two days.  Like this charming Burrowing Owl, who posed on a fence post before yakking up a owl pellet:

Or this adult Cooper’s Hawk, who rested nonchalantly in a bare tree:

Or this White-tailed Kite who huddled on a power line in the cold morning dampness:

Or this Red-shouldered Hawk who stared down at me from a lamp post:

In addition to birding backroads along farms and ranches, I visited a number of National Wildlife Refuges including Colusa and Sacramento.

These refuges control the water levels inside the refuge to create good wintering habitat for waterfowl (generally, broad expanses of shallow water interspersed with some mud or vegetated areas for resting and roosting).  A treat for me was watching these Ross’s Geese, the smaller cousin of the Snow Geese we have back home in western Washington state.

While most of the birds here are relatively common to this area, I did see one rare one – another lost bird from Eurasia.  This one is called a Tufted Duck.  It looks like a Scaup, but it has an all black back.  And if you look really closely, you can see the hint of a tuft on the back of his head. 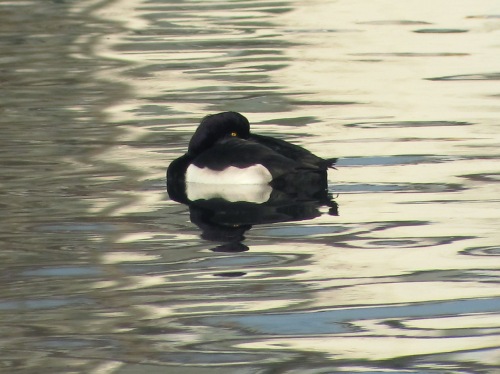 This one was too sleepy to take much notice of me, but he did open one yellow eye to give me the once over.

Up next: the search for more owls.