You probably don’t know it, but right now tens of thousands, maybe even hundreds of thousands of Canadians are sneaking across the border into New England in a coordinated invasion.  This operation is so secret that most Americans are totally unaware that it is occurring, right under their very noses.  In fact, when I arrived at dawn to Salisbury Beach in northeastern Massachusetts, I could see that dozens of Canadians had already stormed the beach and taken up residence, undetected, in the campground.

Fortunately, not a single one of these Canadians is armed.  That’s because they don’t have arms.  They do, however, have wings.  They are the northern finches.  And they’re here to eat our seeds.

The birds above are Common Redpolls.  They normally spend their lives in the boreal forests of Canada and Alaska.  A few venture down into Maine and Minnesota most winters, but usually they are tough to see in the Lower 48.  Unless there is a finch irruption.  Like right now.

Northern finches, more than other most other birds, move around in unpredictable ways.  They don’t usually migrate long distances each spring and fall like the neotropical warblers and flycatchers.  But they are dependent on a robust supply of seeds.  And when that supply shrinks in a certain area, the finches move to find better food stocks, sometimes travelling hundreds of miles.  Every few years the northern finches have trouble finding enough food in Canada, and they will “irrupt” southward during the winter into the Lower 48 in search of food.

This explanation is a bit over-simplified, since really there are many different kinds of northern finches.  They eat different foodstuffs, and will irrupt at different times and in different places.  But right now there is a nice movement of Redpolls into Massachusetts and neighboring states.

Redpoll literally means “red cap,” and you might be able to see a hint of the red patch right above the forehead on these birds (maybe you can see it better on the first photo of the whole flock).

A special treat at Salisbury Beach was the presence of dozens of White-winged Crossbills, one of my favorite northern finches.

Crossbills eat the seeds from inside cones of certain conifers such as spruce trees.  Their bills are literally crossed, with the top curving down either to the left or the right over the bottom mandible, which curves up.

The Crossbills use their specialized beaks to pry open the spruce cones and extract the seeds.  Their unique crossbills allow them to open cones that are too tough for other animals to break.  The spruce trees have a secret weapon, though, to keep all of their seeds from being eaten.  They produce variable cone crops from year to year.

If the spruce trees always produced the same number of cones and seeds, it’s possible that the crossbill population would grow to such a point that they would eat the vast majority of the seed crop, leaving few to no seeds for germinating the next generation of spruce.  But the spruce trees respond to subtle environmental factors, producing abundant crops in some years and paltry ones in others.  In low yield seasons, the seed eaters either die off or move away.  In abundant years, there are more seeds produced than any predator can consume, and some are assured to germinate.  However the Crossbills have wings, and have in turn fought back by developing a highly itinerant lifestyle.  They have eschewed both a sedentary life and also a highly predictable migratory one in favor of wandering the forests of North America trying to find where the seeds are.  And right now, some of the seeds are here in Massachusetts. 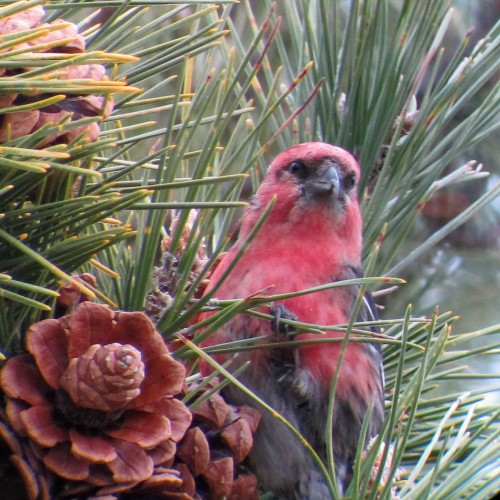 The direction of crossing doesn’t appear related to gender or any other particular trait.  About half of the population is crossed in each direction.  But the direction does dictate which seeds can be easily extracted from a particular cone.  About half of the seeds in a cone are easy to reach for a “righty” while the other half are easy to reach for a “lefty.”

The Crossbills fed mostly in the trees, but some even ventured down to look for cones that were already on the ground. 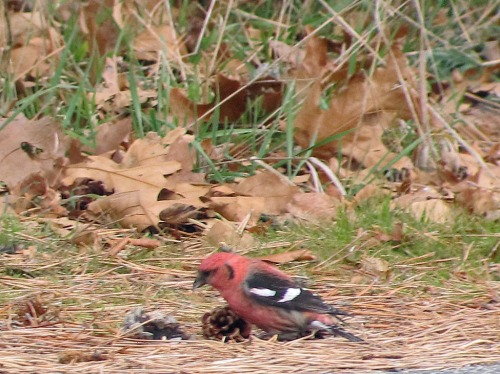 This good-looking chap is an American Tree Sparrow.  He’s not a finch and he is a regular winter visitor to New England, not an irregular irrupter.  But he was nearby the finch frenzy and was looking left-out, so I snapped his photo.

If you want to know which finches might be coming to a conifer near you, check out Ron Pittaway’s Winter Finch Forecast!  It will keep you current on which Canadians might be sneaking into your backyard.  Hide your seed!  Unless you want to see them, in which case you should fill up your feeders.