Twitched, dipped, ticked a mega nemesis, but nearly gripped off

I’ve been doing a mixture of activities lately: some fun, some important, some both, and some neither (nature walks with my kids, visiting some awesome science teachers, reading Nate Silver’s The Signal and the Noise, getting my car serviced, cleaning the garage, writing college recommendations, and searching for the missing mates to a bunch of socks).  I’ll leave it to the reader to sort those activities into the appropriate bins.  I’ll be posting about some of my school visits next month after I’ve had more time to mull over what I’ve seen.  But this post is about twitching.

Twitching, if you didn’t know, is about chasing a rare bird that was first found by someone else.  Normally I’m not a huge twitcher.  I enjoy exploring on my own and finding my own birds.  But since I’m doing a big year, I have decided to switch to the twitch (at least on occasion).  I don’t have the time or money to find all of the birds on my own in 365 days or less, so I will sometimes be chasing reports of rarities (usually posted on Tweeters or eBird).  A mega is a really rare bird, one that doesn’t regularly occur in your geographic area.  The definition of “your geographic area” varies, but often refers to the continental 49 states [except for the really far-flung Alaskan bits] and dang near all of Canada.  When I heard there was a Slaty-backed Gull hanging out in the warehouse district near the Port of Tacoma, I decided to twitch this mega.  Slaty-backs are commonly found from Siberia to Japan, but only very rarely in our neck of the woods.

One of the bad things about twitching is that you don’t pick the birding location; the bird does.  I like to pick beautiful nature preserves, parks, wildlife refuges, and remote wilderness areas.  Rare birds often choose landfills, abandoned industrial plants, or vast mucky mudflats.  This Slaty-backed Gull selected a choice industrial area in Tacoma, near factories, warehouses, garbage-strewn empty lots, and abandoned railroad tracks.  Sweet!

I headed down last Tuesday, determined to tick Slaty (that is, check him off my list).  But despite scanning many rooftops full of sleeping gulls, trudging through fields of broken vodka bottles and Himalayan blackberries, and checking various water birds loafing in the industrial canal, there was no Slaty anywhere.  I had dipped (or ‘dipped out’) – the bird may have seen me, but I had not seen the bird.  Slaty-backed Gull was becoming a nemesis bird – one that I had tried, and failed, to see several times going back to at least 2008.

Not to be deterred, I went back two days later.  I decided what I needed was a bit of optimism, a strong dash of persistence, and a tiny dab of luck.  With some hard work, I was going to tick Slaty!

Three hours later, I was tired and thirsty.  And my feet hurt.  The afternoon rush hour was already started to clog I-5, and I cursed Slaty and all of his ancestors as I trudged back to the car.  I had identified a handful of other gull species, but no Slaty.  I thought I caught of glimpse of him flying overhead and disappearing behind a hill a half-mile away.  But when I trekked over there, I saw Glaucous-winged Gulls, Western Gulls, Thayer’s Gulls… but not Slaty.  Later, I thought I saw him on a rooftop, but just as I hurriedly set up my spotting scope to get a better look, he walked behind a group of other gulls and promptly disappeared.  When I trekked over to the rooftop to get a better look, the gulls waited until I was within 100 yards before exploding off of the roof, scattering far and wide.  I caught a flash of a very dark gull disappearing behind a mountain of recycled wood scraps a half-mile away.  This gull was starting to piss me off.

I made it back to my car to find two other birders just leaving.  “Did you see the gull?” one of them asked.  “No,” I responded glumly.  “Well, it’s right here!  We were watching it until just 30 seconds ago.  In fact, we’ve been watching it right here for over an hour!”  I jerked my head around, but from that angle I could only see a small part of the roof.  But was that the very edge of a very dark gull I saw just over the ledge?  I walked 15 steps up the hill to a better vantage point, and set up my scope.  That stupid bird had been waiting for me back at the car all this time?!  Scanning the roof I saw… nothing.  Well, not nothing.  I saw 14 Glaucous-winged Gulls, and 4 Glaucous-winged x Western Gull hybrids… but no Slaty.  The two guys got out of their car and came over.  “Where did it go??  It was just here!”

I was now getting that sinking feeling.  Dipping out is bad enough, but the lowest of the low is getting “gripped off.”  Dipping just means you missed seeing your twitch.  Getting gripped off means that you missed it, but someone else (everyone else?) saw it.  When twitching, it’s hard to feel more depressed than when you get gripped off.  “Well, it was standing right on the apex of the roof just a minute ago, walking around…” one of the other birders started.  “It must have just walked down on the far side of the roof…” the other one finished.  The far side of the roof that was only visible from inside an industrial lumber yard, surrounded by barbed wire and filled with beeping forklifts and idling 18-wheelers.

I thought about going home.  Or crying.  Or going home and then crying.  But I decided instead to GET THE BIRD.  So, to make a long story short, I met the manager of the lumber yard (an extremely nice man) who was just getting off work, had a brief tour of the lumber yard, and then got 10 minutes of quality time looking at Slaty through my spotting scope from the far side of the roof (while half-listening to how 1-inch softwood boards start as 5/4-inch boards before they are dried and cured).  By this time, it was too dark for good pictures, but I managed a “record shot” of Slaty on the roof: 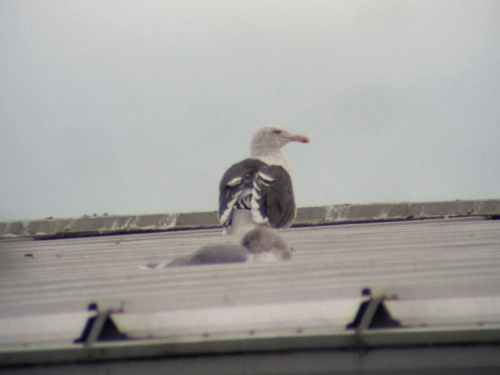 You can even get a glimpse of the diagnostic field mark of an adult Slaty-backed Gull – the “string of pearls” on the primaries (or in non-birder talk, a series of white spots that are visible on the tips of the longest wing feathers – check out the black and white feathers from his right wing that are sticking over his back, just above his white tail region).

And that’s how I twitched a mega, dipped once, narrowly missed being epically gripped off, and ticked a nemesis bird.