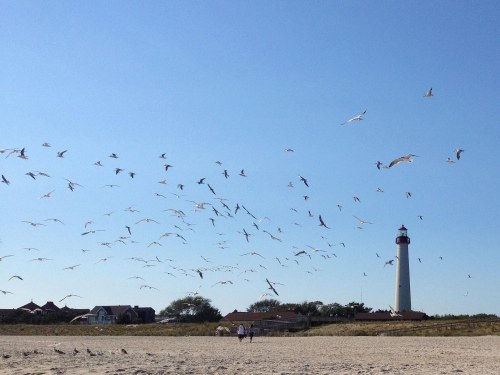 While my favorite kind of birding is walking through the fields and forests looking for warblers, hitting the beach and marshlands is pretty appealing too.  New Jersey has a lot of such habitat, so I spent several days this week looking for common and rare gulls, terns, ducks, sandpipers, plovers, rails, and sparrows.

The area around Cape May has several nice shorebird locations, and I spent several mornings and afternoons walking the beach at Stone Harbor and Cape May Point State Park.  It was fun to see all of the different bird tracks in the sand and try to guess who made each one (above: Semipalmated Plover).  My best pick-up here was Lesser Black-backed Gull, an uncommon visitor from Europe.

I also spent most of a day at Brigantine (official name: Edwin B. Forsythe National Wildlife Refuge: Brigantine Unit), just north of Atlantic City.  This is terrific saltmarsh habitat, and a great place to see shorebirds, terns, and egrets. 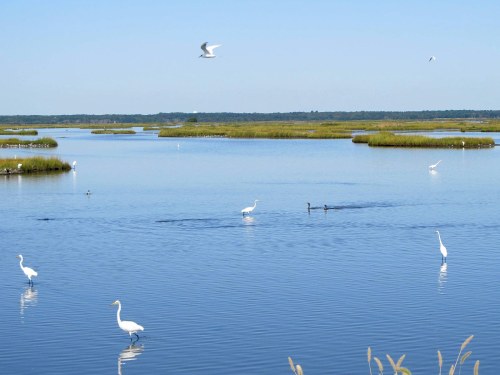 I spent about 4 hours just driving the 8-mile auto loop, stopping frequently to look, walk, and take photos.  I brought my trusty 60x telescope, and spent a lot of time squinted through it at distant birds and other critters (my wife calls this “lump identification” – where you try to figure out what that sleeping bird is on the far shore, 300 yards away).  At times, I caught a glimpse of Atlantic City in the background, an interesting contrast to Brigantine.

My best bird here was the secretive Saltmarsh Sparrow.  These guys are pretty shy, and spend a lot of time hiding in the emergent vegetation.  I managed one photo, which shows a typical view you get of this species.

The Saltmarsh Sparrow is one of about seven sparrows (in North America) in the genus Ammodramus, and they are pretty much all known to be hard to find and hard to identify.  So far this year I’ve already seen five out of the seven, so I’m feeling pretty good about that.

As the day at Brig warmed up, the sun began baking the marshland.  Waves of distortion created by the rising warm air began to make viewing difficult, especially through my telescope.  You can see the distortion both in front of and especially in the background behind this distant Merlin (a small falcon), as he tries to figure out which sandpiper to have for lunch. 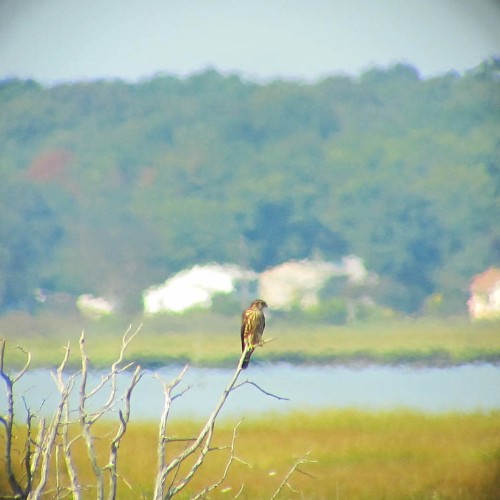 After a couple days on the Jersey Shore, I took the ferry from Cape May to Lewes, Delaware (about 17 miles/80 minutes across the bay).  Halfway across, the ferry was buzzed by four low-altitude F-15 fighter jets (from Dover Air Force Base?), literally the loudest sound I’ve EVER heard.  I felt partially deaf for the rest of the day.

I spent yesterday day driving north along the Delaware bay shore, stopping at Prime Hook and Bombay Hook National Wildlife Refuges.  Ok, it only took me about an hour to do the actual driving part – Delaware is small!  I’m leaving the beach behind for now – next stop: Hawk Mountain, PA.