I spent three days last week in northcentral Washington, mostly in and around Okanogan County.  I found both spectacular scenery and spectacular birds, but not always in the same place. 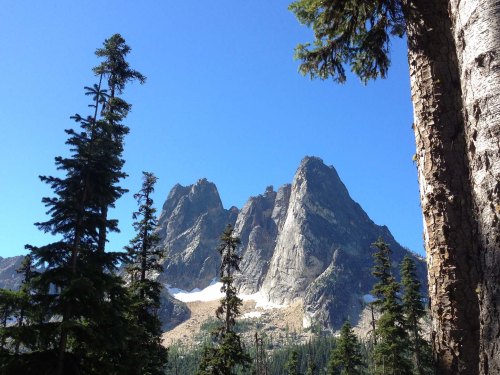 I decided to drive over the North Cascades Highway (SR-20).  This is a fun drive through jaw-dropping natural splendor.  I spent the whole morning stopping and hiking in four different places from Rainy Pass to Washington Pass (pictured above). 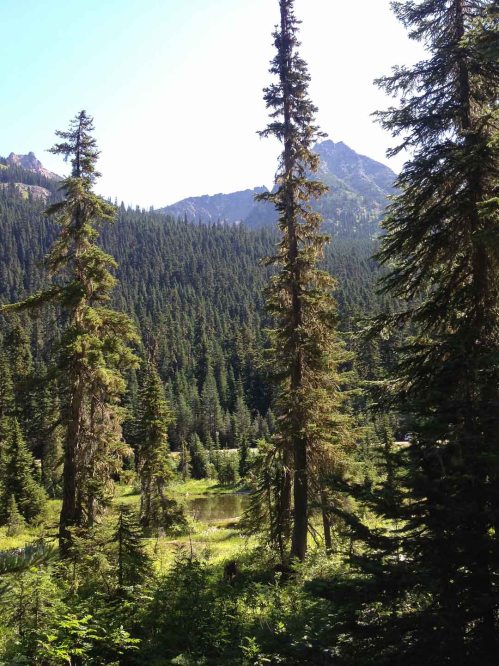 While I couldn’t ask for better weather or views, the morning was virtually bird-free.  In my first HOUR of hiking, I recorded a total of two birds: one juvenile American Robin (Turdus migratorius, TJ!), and one (briefly and distantly seen) Golden-crowned Kinglet – both birds I can easily see out my window in suburban Kirkland.  An entire morning of bird watching netted me about 7 species, none of which were particularly rare or unusual.  Not great stats, considering a “good morning” elsewhere can be 50+ species.  Still, it was hard to complain walking through meadows like this one. 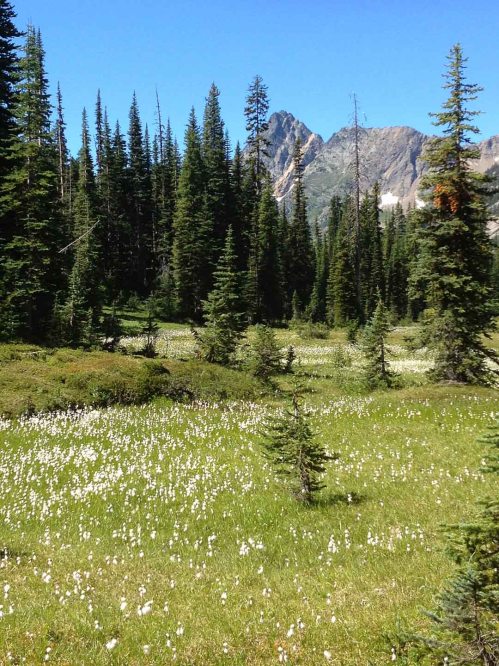 Why was my morning nearly birdless?  Well, several reasons.  The first is the time of year; mid-August can be a bit of the doldrums for land birding.  May and June are the height of the breeding season for most species in Washington, and birds are abundant and conspicuous then: singing and chasing mates and rivals, building nests, and feeding babies.  It’s much easier to find them when they are making a huge racket!  In July, many juveniles are leaving the nest and becoming independent.  By mid-August, the forest can be nearly silent.   Many neotropical migrants, who only spend the summer in Washington to breed, are already winging their way south to their winter beach houses in Mexico, Costa Rica, or Brazil.  Even birds that live here year-round are quiet, done with the noisy business of finding a mate and raising a family.

Another reason for my low species count is that high altitude montane forests tend to have lower bird diversity and density than areas lower down.  The living conditions there are harsh, and the colder temperatures make food less abundant.  Also, when the breeding season ends, many birds give up defending a particular territory and become more mobile, sometimes joining mixed-species flocks.  This means that their distribution through the forest becomes more patchy.  You might walk for an hour and see nothing, then stumble upon a flock of 20-30 birds which will move through an area, and then silence falls again.  If you don’t run into a flock, you are just having a nice hike and not really bird watching.

I spent the night in Winthrop, and then headed out the next day to a birding hotspot – an area that had burned to a crisp in the 2006 Tripod Fire north and east of Winthrop: 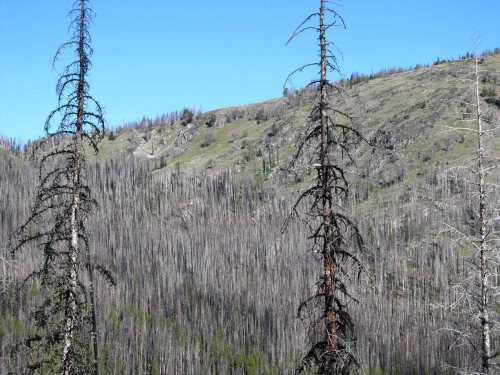 Yep, I passed up birding in the beautiful pristine forests of North Cascades National Park and Okanogan National Forest to drive deep into an area that had been ravaged by wildfire.  Why?  Because burns can be incredibly productive for wildlife.

For most of the 20th Century, we listened to Smokey the Bear lecturing us about the value of preventing forest fires.  While Smokey (and his “handlers” at the US Forest Service) had the best of intentions, the severe curtailing of natural forest fires in the American West had some unintended consequences. 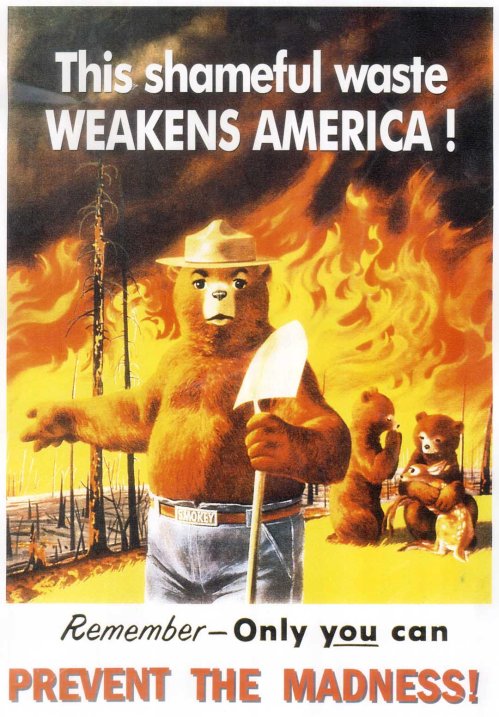 Western forests have evolved to benefit from low intensity fires that periodically sweep through and burn undergrowth, fallen branches, and smaller trees.  This opens up the forest, allowing sunlight to reach the forest floor and new plant communities to spring up.  Some trees (like the Lodgepole Pine) have cones which only open and release their seeds in response to fire (the cones are sealed shut with resin that melts during the fire).  When small fires are suppressed, forests can grow choked with timber and undergrowth.  These unhealthy forests are then much more susceptible to large scale devastating fires which burn everything in their path.  Fortunately, the forest service has changed its management strategy in recent decades, but it will take a while for natural fire to return Western forests to a healthy state.  In the meantime, events like the Tripod Fire (which burned 175,000 acres) and the current Taylor Bridge (near Cle Elum) will continue on an annual basis.

Even despite the size and intensity of the Tripod Fire, I still found some good birds in the burn.  Beetles and other wood-eating insects move in and multiply rapidly after a major burn, drawing woodpeckers from the entire region to come in and feast.  In particular, hard-to-find woodpeckers like Three-toed and Black-backed are burn specialists, and love a good burn.  This particular burn is actually a little old for woodpeckers, but I found a Three-toed Woodpecker (my first of the year) close by.  An explosion of wildflowers were thriving in the sunlight underneath the burned snags, and dozens of Calliope Hummingbirds were zipping around.  Calliope Hummers are the smallest bird in North America – about 3 inches long *including their bill* and about 0.1 ounces (2.8 grams).  FOUR adult Calliopes together weigh less than my wedding ring.  Also present were Bluebirds, Townsend’s Solitaire, and Boreal Chickadees (like the one pictured below) in the burn or at the edge of where the burn meets the unburned forest.  There are four species of chickadees in Washington, and this one is my favorite.  Note the gray-brown cap. 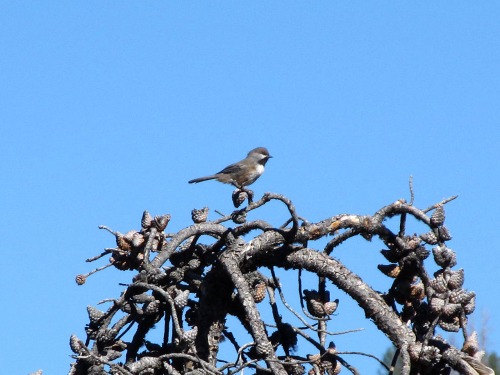 The next day, I explored Forest Road 38, north of Conconully.  This is an unburned area, mainly spruce and fir forest.  My target for the day: Spruce Grouse!  Spruce Grouse have a reputation for being tame and nonchalant around people, but they are very difficult to find because of their relatively small population size and remote habitat preferences (montane spruce forests).  I ran into lots of interesting critters along the way, like Dusky Grouse (the eastside “cousin” of the Sooty Grouse I wrote about in my Olympic Peninsula post) and this Gray Jay that was close enough that I was able to snap a photo with my phone (my camera was in the car). 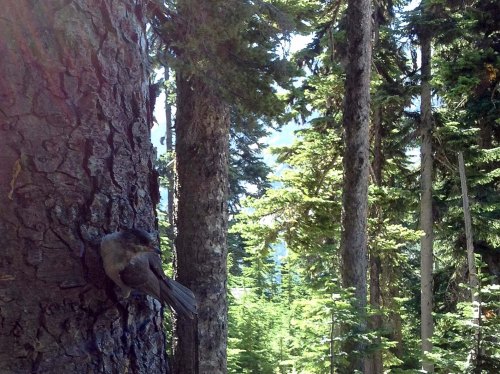 After six hours of looking, I eased around a hairpin turn on the rocky, dusty road and almost ran over a male Spruce Grouse!  I got great looks as he wandered around eating weed seeds and spruce needles.  When I went to grab my camera, though, he freaked out and flew off down the ravine, so sadly I have no pics.  Still, it was a great day up in the mountains.  I had one day left in my little Okanogan trip, and planned to spend it down in the sagebrush.

2 responses to “Okanogan County’s Spruce and Sage – Part I”